Yes, I know, it was a long time AGAIN…what can I say? The Edinburgh Summer, hmmm…I promise you I haven’t been lazing around on a sun soaked beach drinking pina coladas out of a bucket sized frosted glass topped up for me by various handsome lovelies all day long…sigh…no no, I don’t give it a moment’s thought, we don’t do that here, it’s all been hard graft with the heating secretly turned on. Och, it’s ok, who wants to be on the beach anyway? And bikinis are such a horrid subject are they not? And boys, really, budgie smugglers are just too awful to mention right? Although there was one time on a beach many years ago when I came across some nudey drumming…well yeah…

…anyway moving on, I have had SOME fun; I interviewed the very charming Colin Asquith who’s been in to Offbeat recording songs recently. What a sweetheart he is! I’ve been humming this song of Colin’s called Fireworks Fade Away- I’ve put it up here for you to listen to while you read Colin’s interview, coz I’m nice like that 🙂 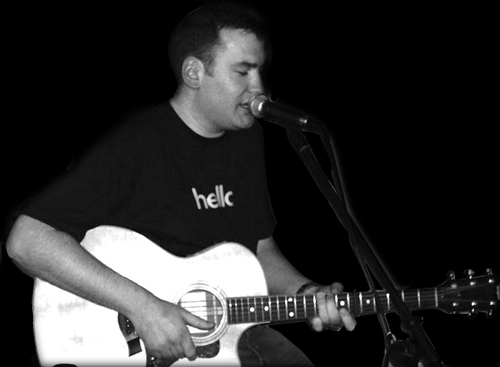 Let me make it easy for you to find Colin;

Do you have musicians who you admire? What’s on your playlist at the mo?

I have a really eclectic mixture of musical styles on my playlist, but mainly I tend to admire well written songs, great singers or songs with interesting lyrics. So a usual night’s listening would be a mix of Beatles, The Smiths, Sinatra, Joni Mitchell, Neil Young, Manic Street Preachers, Radiohead, Nirvana, Kinks and ABBA (see one of my other Offbeat sessions for my take on an ABBA song that I love).

I can’t stand any advert that takes a song I love and replaces it with nonsense marketing lyrics. The Clover adverts that rip off “The Wild Rover” – I’m looking at you.

I have a bad habit of keeping too much stuff in my house, which makes it difficult to tidy up as there is nowhere to put everything, so chore wise, it’s that game of clutter Tetris that I play when I try to cram everything I own into cupboards. I keep telling myself, I just need some good books, a bed, my guitar and a laptop… but never get anywhere near that!

What personality trait has gotten you in the most trouble?

I tend to be very spontaneous and couple that with my tendency to say ‘yes’ a lot more than I should, which either makes for some ridiculously surreal and worrying situations, or fantastically amazing stories, depending on how you look at them. My friends no longer seem to be surprised when I tell them my latest adventures.

Has anyone ever bought you an embarrassing present and how did you react?

Not really sometimes I can’t work out how someone came to the decision to buy me certain things, but nothing too crazy, it’s always nice to get presents! The most embarrassing thing was probably being given a very rudely shaped hot water bottle for a charity show I was doing.

If you were on a desert island with electricity and you could take 4 dvd’s what would they be?

There are some films I can watch millions of times and still feel the same, Amelie – which just gives me an amazing feeling each time I watch it, Fight Club- I just love the way it’s shot, and the story gets me every time. Every scene seems to have a catchphrase in it. Happy Gilmore – with Adam Sandler, it’s about the only film that makes me laugh no matter how many times I see it. Probably I would also take the Empire Strikes Back.

If you could only have one picture on the wall where you live, what would it be if it couldn’t be a picture of your family?

The Kiss by Edvard Munch, there’s something about that picture which to me sums up the spinning emotions and togetherness of an amazing kiss.

Is there a moment in your life that defined you as a musician?

I’d always loved music, and singing to myself from a really early age, so have always loved to make up songs and to just sing to please myself. It took a while to get to the point of singing for other people though. For inspiration, hearing the album Back in Black by AC/DC just blew me away when I was young, and it really made me want to pick up a guitar.

What’s the most impressive thing you’ve seen with your own eyes?

Hiroshima in Japan. I went on a holiday to Japan and it’s such a beautiful country. I visited Hiroshima for a couple of days as part of my trip, and the people were the kindest I think I’ve ever met, everything was so beautiful as there is such fantastic scenery around it. The A-bomb museum was truly humbling, and although it was challenging, there was something amazingly uplifting about seeing what Hiroshima is like now, and how kind and welcoming the people there are. It really was one of those moments that changes how you see the world.

If you were in a séance, which musician who’s passed over would you most want to talk to and what would you ask them?

Probably Kurt Cobain- although I don’t really know what I’d ask him. I’d probably still get a bit star struck even though it was a séance. It would just be good to kind of chat, you get the feeling you know a bit about people through their music, but it would be good to find out more. There’s something about the way Nirvana songs sound quite poppy, yet either have interesting chords or lyrics that makes them great.

In your fantasy flat rent, who would be the other 3 flatmates you would share with?

Nicky Wire from the Manic Street Preachers, George Best (maybe I’m overlapping with the last question about people who’ve passed over), and Audrey Tautou. You’d have nights of music, some beautiful French spoken by a beautiful woman, chats about politics and art, as well as having a great flatmate to go drinking with, but also being able to take along to a game of fives. Perfect.

In a zombie attack, what’s your plan of escape?

I think too many people focus on running away, surely with our advances in science since zombie films began, we could make a human flesh substitute. Kind of like they did for vegetarians with Quorn.

If you had a time machine, where and when would you go for a vacation?

I think I’d find it quite interesting to be around kind of the 1900s, Edinburgh or Glasgow would be fine, nothing too exotic, I think we forget how fantastic the things on our doorstep are. I’d go there just to see how people lived in similar places that I recognise now, but with less technology. It would be amazing to see, and see if I could handle it. Although I would have a hard time not telling people things I know from now, or get drunk and keep saying to people “we’re going to get rid of all your trams, then decades later we’re going spend ages and loads of money bringing them back”! Or telling people who would win at the football.

When I was growing up, I think the only things I remember wanting to be were a bus driver and superman. I thought that bus drivers always seemed really friendly, but also they could drive wherever they wanted. When I got older, I found that bus drivers aren’t as friendly as I remember, but also they don’t get to choose where they drive. Also – it’s not very easy to grow up to become superman if you didn’t come from Krypton.

I put on a charity concert where everyone that came got to vote for things like how I was dressed, what songs I played and stuff like that. It was great fun, and the people who came raised a large amount of money for charity. In the end I was dressed like a disco pirate playing mashed up versions of classic songs mixed with girl and boy band songs. It was an unusual night! I’ve tended to play more traditional shows since then!

do you have any plans to record more?

Recording at Offbeat has been great, and really been a good push to get some of my material recorded, as well as recording some covers of songs that I love. To me, if you can sing a song in a bit of a different way, then it’s fantastic, if you can’t, then you should probably leave it alone. Ideally I would like to get an album’s worth of songs together as well as get out and play more gigs. I have a habit of either playing lots of gigs at once, or not doing many, so am trying to get back into the swing of playing more often, especially now I have some more songs I’ve written I’d like to give an airing before recording again!

Well I enjoyed that, I’m off to find out what rudely shaped hot water bottles I can buy for those of us who are not on the beach and are staring out at the summer rain…grrrrr. If you want to visit the Bossman’s blog for more on Colin, go to

although I’m warning you now, there are no Pina Coladas over there either…just so you know…

well hey, what to say about me... I'm young enough to believe in wishing on birthday cake candles but old enough to know better... ...remember the song "Hey Mickey"? (f you don't, look it up, it's hilarious, Toni Basil sang it and did a music vid in her cheerleading gear for it) Well when it came out (back in the bad old '80s) I used to dress up in my pink tutu and do the little dance to anybody at home...and no, I don't do that anymore...well ok, only if I've had a few happy drinks and you ask very nicely... Everytime anyone asks me if I've been somewhere before I always say "yeah, when I was about 7" so in my head I did a grand tour of everywhere in that one glorious year and then did absolutely nothing until yesterday... Ok, the embarrassing fact is I get tearful around Santa Claus, I haven't admitted that to anyone before, but I drag my daughter to see Santa in his grotto at Christmas and then I have to pretend I have an allergy to fake snow...
View all posts by jen offbeat »